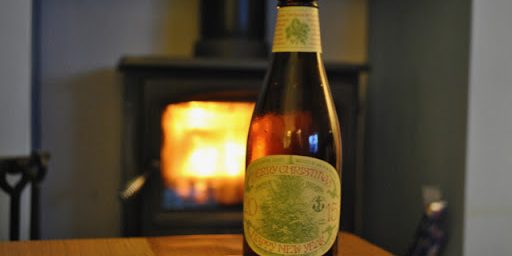 Prohibition, the period between 1919 and 1933 when the manufacture, distribution and sale of alcoholic drink was forbidden throughout the USA, may have lasted only 14 years but its influence was profound. Prior to this period there were countless small breweries all over the country, many of which continued to produce the particular beer styles of the countries and regions, mostly European, from which their founders originated. Without the finances to convert to soft drink production, very few of them survived Prohibition, so that when alcohol was legalised again, mass-marketing turned beer into a bland, canned, convenience grocery product. A few interesting beers did survive, notable amongst these being “Steam Beer”, an ale/lager hybrid peculiar to the Anchor Brewing Company of San Francisco.

The company has a chequered history. Founded by George Breckle in 1874, it was purchased in 1896 by Ernst Baruth and his son-in-law Otto Schinkel, only to be destroyed in the 1906 earthquake. Rebuilt on a new site, it was then destroyed by fire in 1934, only just after the repeal of Prohibition. It was rebuilt a second time, and continued on its new site until 1961, when it moved for a third time. By now the business was struggling in the face of competition from the increasingly powerful national brands, and in 1965 it was on the brink of closure.

What happened next was a pivotal moment in American brewing history, comparable to the foundation of CAMRA in the UK a few years later.

Fritz Maytag was a member of a family that made kitchen appliances – washing machines, refrigerators, dish washers and so on – and happened to be a great fan of the beer. One day at the Old Spaghetti House, a watering hole on San Francisco’s North Beach he was told by the barman

“Enjoy the beer. It will be your last. The brewery is closing down at the end of the week”.

A dismayed Maytag visited the dilapidated brewery to see if he could help. Somehow closure was averted, and he became a partner in the business, and in 1969, having sold his shares in the family’s white goods firm, he became the brewery’s owner. Decades of decline were halted and reversed, new products were introduced, and by the mid 1970s Anchor was a model brewery, with admirers throughout the industry and enthusiasts across the globe.

In 1975 at harvest time, Maytag took the brewery staff on a journey to the furthest northern reaches of California just below the Oregon border and invited them to select one field of barley that they would then use to make a special Christmas brew. It is a symbolic journey that has been repeated every year since then, the staff themselves assisting in the reaping process.

It might be appropriate to quote Fritz Maytag himself at this point.

“The people who make Anchor beer understand that barley is not something that comes down a telephone line. They know that it comes from the soil of California, and the weather, and all the effort and hopes and uncertainties and calamities and successes.”

Each year the recipe is adjusted, with new herbs or spices, different malts and hops, so that no two Christmas beers are the same. A small amount reaches the UK market and is eagerly sought out each autumn by enthusiasts. So how does 2015’s offering shape up?

It’s very dark brown in colour with a 5mm khaki head that subsides quickly to leave a thin lace of foam. The aroma is decidedly malty with spices much in evidence (ginger, cinnamon, nutmeg and anise), but there is a hint of sour fruit in there too, reminiscent of some Belgian wood-aged beers. The flavour shows these same features with the addition of dried fruit (prunes, raisins, figs and so on), and some notes of chocolate and treacle, though the whole effect is not overly sweet. A slightly acidic, woody taste is evident too, reflecting the sour fruit notes in the aroma. All of this is backed up by a big, roasty bitterness, charred and smoky, with lingering chocolate, spice and alcohol in the aftertaste. This is a lovely, comforting winter beer, best drunk at room, not fridge temperature.

Fritz Maytag retired in 2010, but the iconic brewery continues, a symbol of one man’s determination not to let individuality, quality and tradition fade away. I’m sure I’m not alone in thinking that without Maytag’s intervention the US brewing scene, and by extension the British brewing scene, would be in a very different, and much poorer state.

Sainthood would seem to be an appropriate reward for his endeavours (Saint Fritz of Frisco rolls off the tongue quite nicely), but I’m not sure to whom one writes. I’ll just have to satisfy myself with raising a glass of Anchor Christmas Beer 2015 to his health.