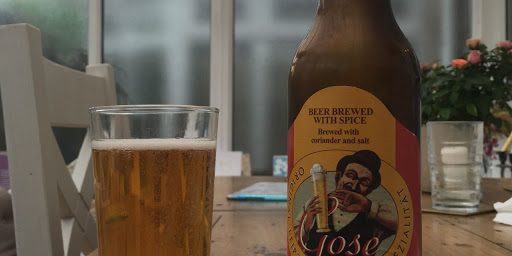 The current revolution in brewing has rescued many beer styles from impending oblivion, and in a few cases has even revived previously extinct styles. Mild ales, which sixty years made up perhaps 80% of draught beer in the UK, all but disappeared during the 1980s and 90s as their cloth cap image fell out of favour. They remain a minority taste but their future now seems assured. The weissebiers of Bavaria went through a similar decline during the 50s and 60s, and for much the same reasons, but are now firmly in the ascendant. Porters were mere history when York Beer and Wine Shop opened its doors in 1985. Now they are very much part of the national and international beer scene. Saison beers, a niche product even in their native Belgium, seem to be springing up everywhere. One beer style still under threat is a speciality of the German state of Saxony, and most particularly its capital, Leipzig.

Gosebier first appeared at the end of the 10th century, in the town of Goslar (from which it takes its name) about 100km west of Leipzig. It is a top-fermented beer, made from a 50/50 (near enough) mix of malted barley and wheat (qv Bavarian weissebier), spiced with hops and coriander (qv Belgian witbier), and fermented with yeast and lactobacillus (qv Berliner weissebier). Its unique feature is the addition of salt to the brew, a process introduced by Leipzig brewers in an effort to reproduce the mineral rich water of the beer’s original Goslar home.

At the beginning of the 20th century, Gosebier was the most popular beer in Leipzig, with around 80 breweries in production. After WW2, the style declined steeply, as breweries damaged by wartime bombing remained unrepaired under the East German communist regime. Only since reunification has the decline been reversed, and only to a very modest extent. Gosebier’s future should still be regarded as uncertain.

Pale yellow and decidedly hazy, it pours with a moderate head, subsiding quickly to a thin layer. Its wheat beer origins are immediately apparent on the nose with banana, kiwi fruit, a hint of bubblegum, some herbal notes and a cider-like streak of apple. Although hops are listed among the ingredients, they are imperceptible in the aroma, and only just apparent in the flavour, which is very dry, with light, biscuity malt, and tart lemon and green apple. There are spices too, and a refreshing acidic sourness, with the salt showing in the finish as an intriguing mineral aftertaste. Rest assured this is not beery seawater! Like its Berliner Weissebier cousin, it is often served in its home territory with a dash of raspberry or woodruff syrup to offset the sourness, but true aficionados prefer it straight.

This is a really crisp, distinctive and thirst-quenching beer, which could be just the ticket as we head towards the scorching summer months. Drink it, and help save an endangered species!

Welcoming back The Star Inn the City
12th August 2020