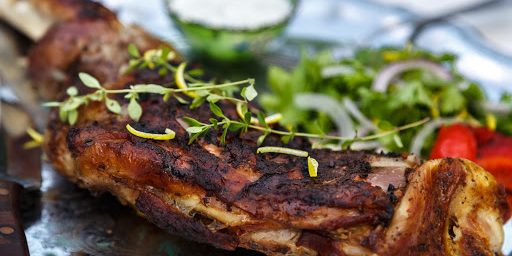 Roast lamb shoulder sits high on my list of favourite foods. It gains bonus points for being a relatively inexpensive cut compared to the commonly found leg joint. Any piece of meat taken from a hardworking part of the animal will always deliver on flavour and texture, though can sometimes require a little longer in the cooking.

With many associations for the lamb as a religious symbol and the meaning of Easter, the meat first appears on the menu after a 9th century Pope adopted a whole roast lamb for his Easter dinner. This soon became a popular choice as the trend spread across Europe.

The green sauce in this recipe is a modern take on an early medieval recipe often served with boiled red meat and fish dishes. A combination of herbs; spices and vinegar it could be seen as a precursor to the more familiar mint sauce served today. It also bears a remarkable similarity to Moroccan chermoula – though much smoother in texture.

Sharp, highly flavoured condiments are a common addition when eating meat and fish from the medieval era. Designed to balance the ‘humoral’ quality of the protein – as based on the medical beliefs that all foods were hot, dry, warm or moist – they were poured over the meat before serving. Green herbs offer additional medicinal qualities.

I like to bring the lamb to the table with a large bowl of herbed couscous, freshly toasted pitta breads and a small jug of the green sauce. If lamb isn’t your thing try this bright green condiment with oily fish or halloumi.