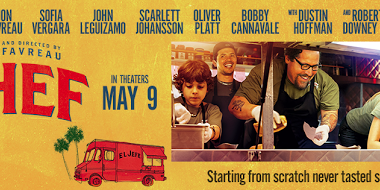 When I first watched the trailer for the 2014 film Chef, I commented on the Dude and a Monkey podcast that there was no way I’d ever watch a movie which looked like Favreau trying to massage his own ego back to life after Marvell Studios allegedly dropped him from the third Iron Man film. I’ve previously had issues with Favreau as a film maker, finding him a passable if mildly unlikable screen presence, but a capable director and (to give him credit), a pretty decent writer.

So why in the face of these negative reactions did I ever bother watching in the first place? Food!!!

There are a few things in life I’m truly passionate about aside from the usual family, friends and a football team that consistently lets me down. They are films and food!

Food is the only thing that fascinates me as much as film. We need food to survive – that’s unavoidable – but who wants to just survive? I want to live! So food isn’t subsistence; food is an event. Every meal should be something to look forward to. That’s why my wife shakes her head every time I suggest sandwiches for lunch. I don’t want two slices of bread and some cheese. No! I want different types of bread! I want at least four fillings and three or four sauces! That’s where Chef comes in – indulgences. Yes, they may be the indulgences of a character that I didn’t really have time for (Favreau’s Carl Casper has the propensity to be a bit of a jerk), but he’s surrounded by a supporting cast including Sofía Vergara, John Leguizamo, Scarlett Johansson, Oliver Platt, Bobby Cannavale and Emjay Antony, who all bring an energy and overwhelming niceness to the film.

Chef shares its trump card with its lead character as the film truly shines when it becomes unabashed food porn. Once the food truck is on the road, no amount of “look, I’m hip!” social media references and clunky plot devices will stop you from falling for Carl Casper’s Cuban creations. For anybody who loves food, this is without question one that will delight and inspire you to run to the nearest deli, stock up and take a running jump into cuisine that’s yet to really break these shores. Middle Eastern cuisine, Asian cuisine, North American excesses and Eastern European food have all found a happy home here, but South American dishes have never quite made their mark and it baffles me as to why. South American cuisine combines the brashness of North American food with the subtlety of Asian cooking and Chef will have you wanting to replicate the mouth-watering creations you see on screen.

All of my reservations about Chef were fully justified and I can understand why you’d find it implausible (Sofía Vergara and Scarlett Johansson falling for you Jon!), but I found it a joy to watch.