Celebrating the Best of British Chocolate 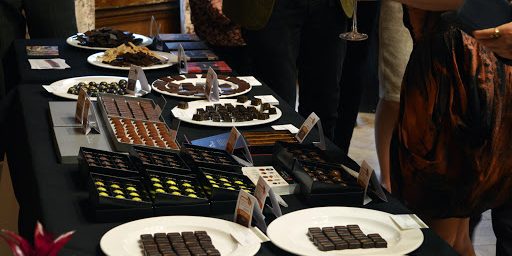 The Terrys and Rowntree’s factories were instrumental in sending delicious York made chocolate across the empire in the early 20th century. After a takeover by Nestle, the Rowntrees site still produces chocolate to this very day, as evidenced by the enticing aroma still surrounding the factory in the north of the city.

Despite the closure of Terrys in 2005 and the reduction in the Rowntree’s site, in more recent times, a number of independent chocolatiers have also made York their home, including York Cocoa House, Choc Affair and Guppy’s Chocolates.

These businesses, alongside the development of visitor’s attractions such as York’s Chocolate Story and Goddards House and Garden (the Terry’s family home), have continued to make York a destination for chocolate lovers and the rightful home of the Chocolate Awards for the second year running!

Having heard the news that the Chocolate Awards were in town, three of the YOAF team; Grace, Bethan and Des, were delighted to take part as judges back in April.

The judging process was obviously a tough one, with severe sugar highs and chocolate fatigue a serious concern. However the team managed to push through and help select the deserving winners from an array of outstanding entries.

We were also delighted to
be invited to the awards ceremony, which was held last Thursday at The Grand
Hotel, an apt location for such an event. Being the former headquarters the North
Eastern Railway Company. The development of the railway in cities such as York
had a profound impact on chocolate production, as it allowed goods such as
sugar and milk to be transported to the city in bulk.

After the awards were handed out, it was then time for some mandatory chocolate tasting (it would be rude not to right?).

Alongside sampling many award winning entries, this part of the evening also provided the opportunity to speak to a number of the award winners about their products and ethos towards chocolate.

The evening was a real celebration of how independent chocolatiers are pushing the boundaries of chocolate – with producers increasingly focusing on quality, provenance and unique flavours.

A full list of the winning chocolates can be found here.