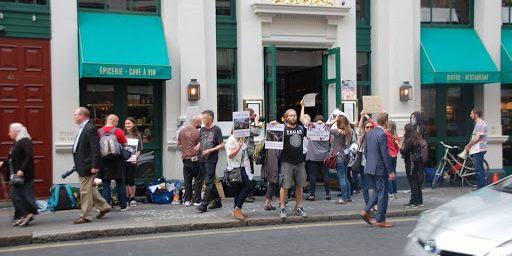 I like to imagine that the local historians of future York will one day come across this magazine and think it suitable archive material, apt to be placed in a dusty store room with other miscellany of 21st century life. I am of course assuming here that archival funding will not have been cut into oblivion by the current government, but I’ve already strayed too far from the point to go into that any further…

So, back to goose liver. Once preserved for posterity in said local archive, eventually a future undergrad York historian (desperate to find a dissertation subject using local source material) will come across our humble food ramblings and decide to perform some sort of cultural analysis while wondering what food meant to the residents of York. What role did it play in their society? What were the rituals and societal expectations associated with the consumption of food? What was considered acceptable for consumption and what was not?

My caveat to the above is that it is often hard to make generalisations, but foie gras is a culinary example of something which is generally seen as bad in our society. It is, after all, illegal to produce it here in the UK, a strong indication of some consensus on the subject. Organisations such as the RSPCA and PETA have also publicly stated that the production of foie gras constitutes the cruel and inhumane treatment of animals.

For those unfamiliar with the product in question, it is a luxury food product made from the specially fattened livers of ducks or geese that have been force fed corn through feeding tubes in a process known as gavage. This force feeding ensures that the birds eat more than they would do if left to their own devices and is undoubtedly detrimental to the welfare of the birds, causing stress, throat damage and ill health due to swollen livers.

The main consumers and producers of foie gras are undoubtedly the French. In 2014, France was producing approximately 72% of the world’s supply. Despite the other 22 EU countries introducing a ban, French law explicitly states that “Foie gras belongs to the protected cultural and gastronomical heritage of France” (French rural code L654-27-1)

During a trip to Paris a few years ago, it became evident to me that the dish could be found in most mid- to high-end restaurants, all of which seemed to be proud to serve it. I must confess that I did actually try a sample of foie gras entier, though admittedly I was unaware at the time of its unsavoury origins. I have to report that it was absolutely heavenly. If pâté is the equivalent of meat jam, foie gras has to be the most luxurious meat compote – unctuous and satisfying beyond belief. I can see why demand remains high, despite the obvious controversy surrounding this national dish.

Now as someone who is fervently passionate about ethical issues in general and especially those in the food industry, you are right to be surprised at that admission of controversial consumption above. It is true that I would not choose to eat it now, however I don’t believe it warrants the attachment of such frothing shame that seems sometimes called for when discussing the delicacy.

What I really would argue is that the meat and dairy industries, in their worst forms, are equally inhumane. If we are disgusted at the thought of gavage and force feeding, should we not also be equally disgusted at the cramped conditions of intensively reared animals, or the wasteful destruction of male chicks in the egg industry?

Since the early 20th century, industrial farming and global capitalism have worked together to provide cheaper meat in much reduced timescales. This mass production has mostly has come at the expense of the living conditions and lifespan of the animals we consume, many of which have been denied space, light and the chance to reach maturity at a natural pace. Whilst the majority of animals are not force fed through a tube, they are undeniably condemned to a miserable existence which is mostly parallel to that experienced by those ducks and geese destined to produce foie gras.

On the whole, we are a nation of carnivores, who on average each consume 79.3 kg/year of meat. The majority of this meat will have been industrially produced in low welfare conditions with little regard to the animal’s quality of life. Despite this, we continue to be appalled at the our Gallic neighbours’ fervent love for their national dish, which is also the product of animal suffering.

The historians of the future may well note our hypocrisy when it comes to currently controversial meat products. If we are to condemn foie gras, we surely must also be compelled to condemn aspects of the wider meat industry at home and abroad.