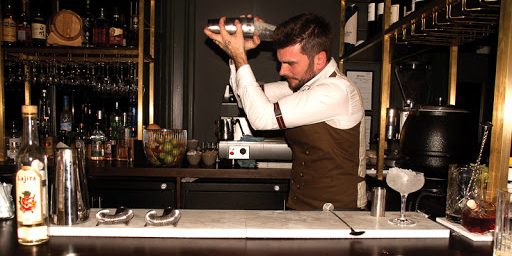 “Craig, is it OK if I could get some shots throughout the night please?”

As a camera-wielder for a food and drink magazine, I should know better than to ask a bartender for shots.

Craig is Bar Manager at The Chapter House, the new bar at the regenerated Royal York Hotel, in which you wouldn’t fail to notice the interior design. The glitz and glamour of Jay Gatsby’s mansion meets the comforting and understated elegance of a drawing room from the British landed gentry. Every detail of The Chapter House is considered. The bar is polished by attentive staff and studded with the finest spirits for those celebrating, while the lounge area has unassuming leather chairs to curl up in for a quiet, romantic date night.

Craig gives a masterclass in cocktail making. Starting with the Mezcal Gimlet, three ingredients are easy enough. We had reached the bottom of the bottle, thus were presented with a special fourth ingredient. The worm. Since Bethan made the Mezcal Gimlet, it was her duty to eat the worm. “It just tasted of alcohol…and was very chewy”. The Mezcal Gimlet was appropriately strong and a great drink to start the evening.

After the Gimlet, we made the Lavender Martini using syrup from lavender grown at the hotel entrance, an idea from one of the chefs. The kitchen and the bar often collaborate on creative ideas to create new drinks with flavours unique to the Chapter House. The Lavender Martini is served in a coupé glass, echoing the Prohibition Era. The more familiar V-shaped Martini glass (Carrie Bradshaw’s default) didn’t become popular until the post-war decades of abundance. To taste, I found the Martini a little saccharine, however Bethan loved it, and we both appreciated that the lavender syrup was sourced as locally as possible!

Craig is an excellent tutor; making the drinks himself so we can see the finished product, before letting us have a go behind the bar. He provides insight into the science behind the shaker; from ice varieties, to selecting the finest sprigs of mint to garnish a drink. I’m naturally anxious, always worried that I’ll make a mistake. Craig put me at ease and didn’t speed ahead.

When the interior designer had finished placing a final antique on a shelf, the bar staff felt a duty that detail was as important to their role. I spoke to Chantel, another bartender at the Chapter House. Chantel had been in her role for several weeks, but had received two months of training prior to serving the public, which is demonstrated in her confidence, knowing where on the bar each ingredient was located, and happy to chat to her customers. Craig’s enthusiasm has clearly rubbed off on his colleagues. Chantel works at the Chapter House full time and all positions at The Royal York are viewed as careers which the staff are invested in. In the making of the next drink, Chantel demonstrated how she’s engaged and invested in her role.

Chantel made us Black Bisons. Featuring Zubrowka Bison Grass, crushed berries, Chambord and creme de cassis, lengthened with lemonade and topped with an iceberg. This is the Chapter House’s showpiece. We watched Chantel create, and just when we thought her work was done, she continued adding ice, fruit and coulis. The Black Bison is a deep, jewel red in colour and a pristine example of a fruity cocktail – without a pineapple or paper umbrella in sight!

At this point, we welcomed nibbles. Puffed pork crackling has the flavour of crackling without the density which would keep you chewing for days, its texture closer to that of fried batter. With the apple sauce, it was true comfort food. The black pudding sausage roll was served hot with brown sauce. The Chapter House understand that no matter how fancy you like your drinks, everyone will welcome some homely and simple food to get them through the evening.

Cocktails not featured on the menu of 20 followed (but if you ask Craig nicely, I’m sure he’ll oblige). The Terry’s Chocolate Orange relied on Mozart Dark Chocolate liqueur for flavour. It’s the first chocolate cocktail I’ve seen which didn’t require dairy, which always turns a drink into a dessert. Craig made my favourite Whiskey Sour and I got a photo of an Old Fashioned being made, a giant ice cube swirled around the glass for five minutes.

The Chapter House is a bar where everything is done properly. They do not rush serving your drink and each cocktail is made using the finest ingredients. Go elsewhere if you’re looking for a Purple Rain or Raspberry Woo Woo. This is the perfect refuge for York residents wishing to have a relaxed night out without fear of the stag and hen parties finding you. The Chapter House is a different world to escape to for a moment of indulgence. Don’t be put off that it’s located in a hotel. The staff will welcome you as if you were staying the night and since the bar is open until 1am daily, you might be there most of the night anyway.

Disclaimer – We were invited to visit the Chapter House and sample their cocktails. While we weren’t billed for the evening, this article remains impartial.