Do We Need Any More Food Places In Town? 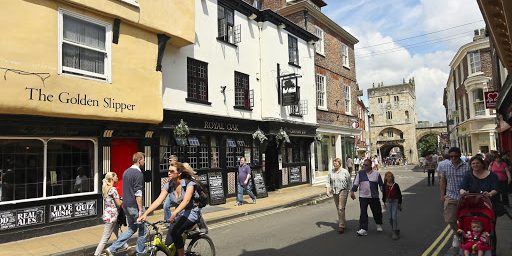 Recently, The Press announced that a branch of Weird Fish would be opening in York. “Do we really need any more food places in town?”, responded one concerned resident. Of course, she didn’t actually read the article beyond the headline. Rather than Weird Fish being a sushi bar combined with an extreme sport, they sell comfy looking fleeces to people who spend their weekends with sheep. Regardless, she asked a question which is likely to be echoed by others. I’m going to respond. Writing for a publication of this nature obviously positions me with a certain bias. However, I care for our city’s universal economy and social offering. The idea of there being enough eateries in town isn’t foreign to me.

York does have an abundance of café’s, restaurants, pubs, bars, tea rooms, hog roasters and milkshakers. On wheels, we have ice-cream vans, sausage wagons, donut stalls, and crepe trucks. Efe’s kebab van will see you safely into the wee hours. You can be well-fed in York. But the truth is, we all are more discerning than that.

We all have our own preference for food, which meanders between time and location. The beauty of York’s smörgåsbord of eateries is that there’s something for everyone. (Apart from maybe those wanting their fix of pseudo-Swedish snacks.)

If you’ve not queued for your lunch in York, you’ve never been. I’ve waited ten minutes for a clear table at Bruks, and ended up sharing a sizeable one with another couple. It’s not just the small cafés. The grande Costa Coffee on Market Street had me queuing the longest I’ve had to for caffeine. I was served a takeaway cup in the hope that I wouldn’t stay. I found the last remaining stool next to a woman who looked at me as if I had mentioned that her child was ugly (it was). I don’t count the Exodus-sized wait for Bettys as a proper queue. You go to Bettys because you think queuing for Bettys will be worth it for telling your friends that you found the Promised Land. The French Fancy is a byproduct of queuing.

Another important issue of York’s is that most of the property in the city centre isn’t big. While all the designers come to York, our stores aren’t anywhere the size of their Leeds and Manchester siblings. Smaller buildings with more medieval nook and cranny than Elizabeth I’s bedposts are the kind of building people want to spend time in. An independent café will embrace the historic styling. A large chain would cover heritage such as exposed beams, cat statues and shonky brickwork if they aren’t mentioned in HQ’s branding guidelines. We have the Vangarde, the Designer Outlet, Monks Cross and Clifton Moor for that. So what would be better than filling the cubby holes with comfy armchairs and art?

We are lucky to have our tourists. The tragedy of the tourism industry is the majority of retail, catering and cultural careers don’t pay a living wage, while York’s budget private lettings aren’t good value. I once lived in an equally historic city of around the same population as York, which struggles to attract visitors. There, cafés are replaced with charity shops, cash-for-bling shops and buy-now-pay-later shops. In fact, there are so few independent shops there, it’s comparable to having a city-centre Designer Outlet.

Let’s embrace what we have. York is a city for long, lazy afternoons eating and drinking with loved ones. York is a city for food. As long as people eat, there will be a demand for quality dining. Finally, if someone does open a sushi restaurant with parcour-inspired dining, we’ll be first in the queue on opening night.