The rules of Cake Club are? 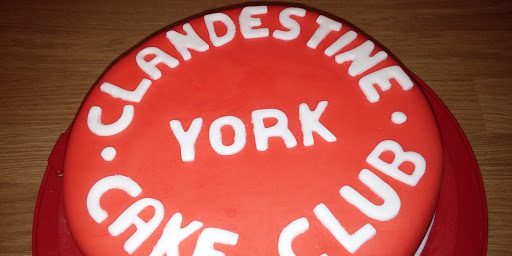 The first rule of cake club is…eat cake? Bake cakes? Share cakes? Who knows…and how much does it matter? Now I come to think of it I’m not at all sure if there are any rules. Still, it’s always nice to make an easy reference to popular culture isn’t it.

York’s Clandestine Cake Club meets on the second Wednesday of the month to offer cake-mad individuals the chance to get together and compare notes, share their creations and show off their skills while making friends. Boasting around a hundred members, its popularity speaks volumes about both the popularity of cake and the enthusiasm of York’s food lovers.

I’ve no experience of baking and have to admit I didn’t fancy presenting an inaugural attempt to a bunch of self-confessed bakeoholics, so I turned up to the top secret venue with a cunning plan: turn up five minutes late and surreptitiously watch proceedings from the door. I made sure all bases were covered by arranging the presence of another contributor who would be a more active participant. You can read her thoughts at the bottom of the page.

The Waggon and Horses on Lawrence Street is now well known to the city’s beer lovers and bar billiards players, providing high quality action on both of those fronts, but the increasingly sure-footed management is always looking for new possibilities, so finding out this was the venue for this clandestine venture wasn’t a shock.

About 20 people turned up with their creations in tow, some impressively intact after being subjected to bicycle carrying, and packed themselves in a snug room ready to get slicing and chatting. Friendly ringmaster Rebecca D’Agostino got proceedings underway by introducing the evening and passing the floor between attendees, making sure everyone got the chance to present and explain their creation.

This was an extremely polite gathering, with very little in the way of interrupting, with the smallest hint of friendly competition. Each cake was treated with respect and its baker willing to share their secrets in response to questions. After everybody was given their chance to discuss their wares, there was the opportunity for sampling and a stab at cake and beer pairing courtesy of the host with Titanic Plum Porter, Batemans Hazelnut Brownie and Batemans Mocha Amaretto on offer.

Perhaps one day the baking bug will bite and I’ll be back, but for the moment I’ll be happy to hear from my colleague how this club goes from strength to strength at future meetings. As for figuring out what the rules are? “Take a cake, talk about the cake, be nice to people and eat cakes” seems to cover it. The next meeting will be Wednesday 11th February at a top secret venue even closer to the city walls than this one. I can’t imagine why you won’t there if you love baking.

One of the overwhelming memories of visiting my grandparents as a child concerns gorging on my grandmother’s wonderful chocolate cake, which had the richest and most buttery filling one can imagine.

Bethan says:
“Many years later, I am still unable to recreate this exact recipe. However her introduction to the world of home baking instilled in me a deep love for homemade cake. The popularity of shows such as the Great British Bake Off further evidence that I am not alone…home baking has undergone a serious renaissance in recent years!”