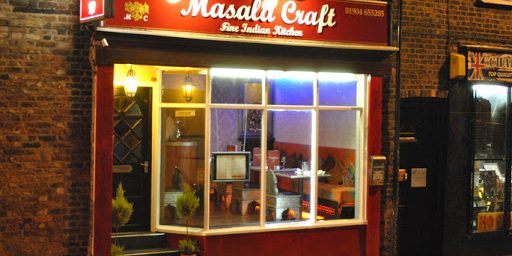 Location really is important. Fossgate and Walmgate are going from strength to strength as they attract more and more places to eat; Gillygate has its talented incumbents and Bishopthorpe Road is well-established nationwide for shopping and eating. All of these locales pull in plenty of passing trade so one fears it’s a bit of a risk to open a new restaurant outside of these obvious catchments.

Fishergate is a bit of an odd place for attracting passing trade, almost the polar opposite of the streets mentioned above. Toto’s has made a reliable name for itself over the years and Loop seems to attract the TV sport crowd while the Woolpack has just passed to new ownership with positive signs, but that lack of passing footfall remains a challenge for local business.

Tasilli was a competent place to eat that seemed hobbled by an ambitious pricing policy while its successor was saddled with a name weirdly reminiscent of a drunken Irishman chastising his wife (O Maria), but it seems like we’ve finally a resident intent on giving this spot a serious punt. Masala Craft has taken over the premises with minimum of fuss over the last few weeks, throwing a lick of paint at it while not going overboard on the furnishings that, seem to me, spookily similar to the Tassili days. With a menu that promises decent prices for something more interesting that the usual curryhouse, it really was an easy choice to get over there.

Well-balanced mango chutney and poppadoms got things going while we decided what to go for from the menu. Galoti lamb (lamb patties) and Keema Pau (minced spiced lamb) getting the starter call up before sea bass and spicy lamb chops were requested. It dawned on us that we’d ordered lamb for three out of four courses- nicely balanced choice Thorpe! It would have been a nice extra touch to have a couple of side plates for the poppadoms, but it’s their table I made a mess of, so I guess not my problem.

Service was excellent, friendly and knowledgeable, if perhaps a touch keen to discuss the establishment’s unique points, and the first dishes arrived promptly. The lamb patties were excellent, avoiding fattiness and grease while not overpowering the meat with heat or spice but the pick of the two was the Keema Pau. Fluffy buns toasted in (what i’m guessing was) ghee absorbed lamb mince with a generous helping of peas. As with the other starter, finding that crucial balance between heat, spice and flavour; it’d be hard not to order another.

Heading into main courses, we went for spicy lamb (yes more) chops and a Masala sea bass. The lamb was served rare and well-seasoned and didn’t fall into the trap I’d feared of killing its appeal with overpowering flavour.

Our waiter recommended the sea bass and it pretty well lived up to expectations. A touch more spice would have helped, but the chef’s skill was apparent from the crisped skin that surrounded flaking white chunks.

Coincidentally my social media posts around the meal prompted an inquiry from a friend, his comments rather more succinct than mine: “Yorkies, get yourself down to Fishergate fast!”

The bill came a smear over £40. Not too bad, but put into perspective by a similar invoice from Ambiente the following day that included sherry samples for two. Still, Great food from people who’re clearly passionate about it – walk the extra five minutes and give it a try!