An order of service 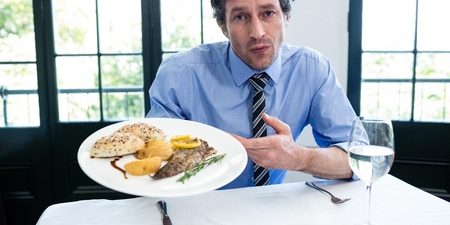 My recent piece on Melton’s, in which I have a good old whinge about a loud fellow diner, got me thinking. It’s all very well to accept (a degree) of idiocy from fellow diners, they are constituent of the general public and therefore not a group to be argued with – read the online comments on any local news story if you don’t believe me – but what about the staff?

You’d hope that you’d be safe from that sort of irritant in service professionals though surely? After all, regardless of job scarcity, once employed, there’s surely a degree of willingness to continue in waiting/bar work/food service isn’t there? I’ve done bar work and I’ve spent several years in customer service positions dealing with the general public, who did their best to reinforce negative stereotypes at every turn, but I’ve never subjected myself to any situation requiring transport of food from a deli counter or a kitchen to an actual living breathing person.

So what do I expect from someone serving me? Taking an example from the retail world, I always cite Richer Sounds as a case study of how to deliver good service that engenders repeat custom. I’ve shopped there for twenty years and wouldn’t countenance buying AV equipment anywhere else as the service is so good, this being the case despite (or because of) the shop’s status as a budget retailer. Yes, there’re bits of tinsel draped round the offering, they’ll carry stuff to your car, pay for parking, give you a free mug and so on, but the core of it is just simply people being proud of what they do, empowered to make decisions and nice to the people they’re serving who I would hope respond in kind.

If only it were that simple when food was involved though. It’s one thing talking through the details of a new telly while colleagues mop up any other customers, who’re free to browse in the meantime anyway, but quite another to deal with rapidly cooling food, slightly tipsy customers wanting to append a side to their order and running back and forward to a hot kitchen. Undoubtedly there’s another dimension to food service that thankfully rarely overflows to customers in my experience.

That pressure can still break the surface though. Anyone who makes as many excuses to eat out as I do has encountered the supercilious waiter, the “overly polite calling you sir at every moment” waiter, the stressed deli worker, the know it all waiter, the superior sommelier and so on. Muddying the waters further, it’s even possible for this approach to have benefits. It’s not at all unlikely that someone working in a restaurant will know the dishes and wine list better than you…while equally it’s not unheard of that people who eat in restaurants have a rather healthier attachment to good food than is strictly necessary. Would you accept a degree of condescension in return for good advice?

Then there’s the Michelin star experience, generally very good and invariably knowledgeable, but prone to the occasional bout of self-importance. I recall one occasion overseas on which the sneery waiter made the quickest possible job of our table in, what I judged to be, a response to the scruffy Brits he was presented with. I don’t feel like there’s a requirement over and above other good restaurants for somehow magical service in Michelin starred places, surely it’s all about the food? That however is another debate, which one hopes would also lay to rest the idea that the use of crumb scrapers is a good thing.

There should be no problem accepting advice from people serving. Coconut Lagoon and Meltons spring to mind in York as places very good at this. I’ve variously ordered dishes that don’t complement each other and wine that’s not a suitable accompaniment in these places but rather than vaguely disguising disdain for my ignorance I just got impartial advice, which I followed and for which those meals were all the better. Let’s also not forget that things go wrong, and we all need to deal with it and get on with our lives/meals. On a recent meal something was delayed and we were told so with an apology, end of story, things can happen and it’s all about how you respond. On another occasion when I asked for a fourth piece of cheese in a deli while there was a queue behind me the response was a muttered *shit*, rather less constructive.

So what’s the message behind all this waffling? My internal dialogue tells me that good service is engendered by the people on either side of the front line staff being human, employers and customers. Surely if customers respect the knowledge of their servers and employers treat their staff as empowered humans then it won’t take much to create a happy synergy.

We all go out to eat because we like food so let’s have a dialogue about it, apologise if there’s a problem, accept that apology when it’s sincere, take advice from people with a good base of knowledge and accept that such knowledge can be on both sides of the order pad. That way people’s professional lives can be eased and people’s recreational dining can be improved.