The announcement heard around the world! (CLOSED) 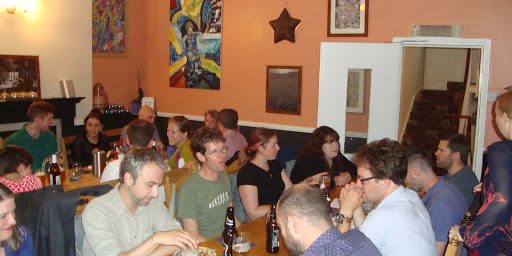 I bang on about food, restaurants and York quite a lot. I worry that this makes people feel pressured to give me good food when they cook for me or make good choices when going out to eat even though the reality is that I’m as happy with a Burger King as a Michelin Star (well maybe not quite, but you get the point). The flip side to this is what feels like pretty intense pressure to make good decisions when entertaining others. When I decided to invite a few friends out for my birthday I was instantly beset with doubt. Would I be able to find somewhere able to take up to 30 on a Friday night at short notice without resorting to a chain?

I tried a few places with varying degrees of success in their proposals until I had a brainwave. I recalled the last time I went to Krakatoa and, when I popped to the loo, that there was a large room upstairs that might suit. I got in touch and was lucky! Understandably pre-ordering was required but with the application of a touch of pressure to a couple of members of the group I managed to take care of that in time to give Krakatoa a fighting chance.

We popped into The Ackhorne just off Micklegate to muster the troops before a Welshman took it upon himself to be punctual to the point of obsession and dragged us to the restaurant at 1859 precisely. That room upstairs was set aside for us and laid with exactly the right number of covers on the basis of the orders I’d submitted. Having a private space would prove to be useful between courses as you’ll hear.

My chicken satay starter was excellent and eventually shared with my neighbour to obtain a sweetcorn fritter that was as tasty as I remembered. Similarly positive noises floated around the room as people tucked into fried tofu, cheese & pork balls and spring rolls.

On the subject of feeling pressure to organise good food and hospitality, we’ve been getting stuck into organising another event for next April which was as yet unannounced. Fortified with a couple of cold Singhas, I stood up to make a brief speech, something that anyone who knows me is well outside my comfort zone. After berating my bar billiards team mates for allowing us to be beaten on my birthday, I finally got to the point and announced that we’d be getting married next April, something that’ll certainly be featuring in future posts. I perhaps should apologise to the other diners for the cheering.

In an uncharacteristic display of organisation, I’d attached the names of each diner to the order list so there was precious little fuss in distributing main courses. I found my chicken in soy to be exactly as I expected and hoped for, tangy and delicate without being over salted as one might fear from a soy-based dish. Quite a number of people had plumped for a mild chicken curry and spoke highly of it. In retrospect, it was an oversight of mine to not pilfer a taste from someone. Gluten free requirements for a Coeliac diner presented no concerns and nobody ordered anything that was so spicy as to induce tremors, so a success on all fronts.

The bill came to £25 a head, the service was superb and the food of such a standard that I suspect our party will further patronise this excellent restaurant. We retired to The Golden Ball for some bar billiards to end the evening. I can’t thank Krakatoa enough for the food, organisation, flexibility and friendliness that all contributed to a memorable evening and a venue to make an important announcement!

PS: I struggled with a pun for this one, the 1883 Krakatoa eruption was one of the loudest noises in recorded history. On reflection the announcement of our wedding may not have the same global impact.