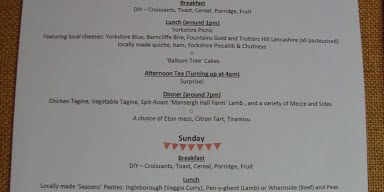 A couple of weekends ago we were lucky enough to attend the wedding celebration of a some good friends who’d decided to tackle the business of getting married on their own terms. That being the case the actual ceremony was conducted with minimum of fuss prior to a long weekend of festivities so that all of their friends could be involved. A lovely spot on which were resident enough lodges to house all the guests was duly obtained in the form of Pinecroft lodges just outside Ingleton and the scene was set for celebrations!

Heading across on the Friday afternoon in the Jag (which for some reason still nobody wants to buy) we had an critical stop to make in Skipton to collect the curry for dinner. I have to confess I’d not really given much thought to how enough curry for forty or so people would be presented, but it didn’t take long to shift everything from the boot into the back seat to leave enough room for the three large buckets of curry. The Aagrah was a lovely canal side spot that I’d love to get back to at some point but that boot full of curry was more pressing.

Arriving at a wedding celebration to see that the schedule is subtitled ‘itinerary’ and that the precedence is given to ‘Menu’ gives further impression that we are in the right place after having made the journey from Skipton at a snails pace to keep that curry at the correct orientation. Stopping the car braced to suggest that everyone start dipping naan in my boot we found everything right side up and were allowed to stay.
The Aagrah curries were superb, a result I would hope of our hosts extensive sampling and good palates. Basking in fortuitous sun the first meal was out of the way and foundation set for the following days.

A ‘self assembly’ breakfast revealed the worlds largest croissants (imagine a slightly emaciated rugby ball) amongst other treasures to get things moving again in a wonderfully informal atmosphere. Wilting in the heat we took a tour of White Scar Caves to appreciate the subterranean constant 8 degree temp before returning for a lunch of local cheese, quiche, meat and chutneys. It was all I could do to stop myself rubbing the Yorkshire blue over my whole body and ingratiating myself to the dogs by feeding them all the ham. Luckily my manners intervened and I was allowed to stay.

The next surprise was our own personal Ice Cream van! Arriving mid afternoon as we entertained ourselves with various outdoor games it was a lovely touch against the heat. This idyll would turn out to be just the backdrop to the evenings gluttony though as local caterers arrived to start barbecuing an entire lamb on a spit roast. The catering for the evening was courtesy of the Marton Arms Hotel, for whom I believe this venture into outdoor catering was not the norm.

Having worked up another appetite the group seated itself ready to toast the happy couple in the large dining space while the caterers set about their best efforts to defeat our appetites (hint: they won). Chicken and vegetable tagines, spit roast lamb, mezze and salads all put their best feet forward into battle with a bunch of hungry guests and won the battle. The lamb was a tremendously succulent and beautifully seasoned, crisped outer flesh giving way to pink moist chunks of meat ready to make friends with the salads and sides. I can’t claim to have made it much further than the lamb I’m afraid, though I didn’t hear a bad word about the tagines or the majority of the sides. The falafel balls were rather overcooked, perhaps having been overlooked in the melee of dishes but if this is the only oversight amongst all those fantastic dishes that seems a pretty good result for chefs cooking outside of their usual environment!

After a few hours of terrifying the dogs and children with my radio controlled car it was time to retire and contemplate the next day, which we knew was to begin with a further ‘diy’ breakfast – another point of relaxed informality. A visit to the previous evenings chefs was scheduled for later in the day but unfortunately we needed to make a move not too long after taking in the beautiful, if expensive (£6/person for a walk) Ingleton water falls. We managed to sneak lunch in before we left though, enjoying plump tasty pasties containing veggie curry, beef or lamb. Sadly I’m not sure of their provenance but as a non-pastie-fan (does that work?) I’d certainly suggest getting hold of some. Suitably set up to point the Jag east, we bid farewell and thanked our lovely hosts for such an amazingly thought out and executed hospitality.

Even if you skipped all that waffle about food, this is the most important bit…raise whatever glass is in your hand and toast Sarah and Sol – thanks for an amazing weekend guys, and Congratulations!