Happy Birthday Too You! 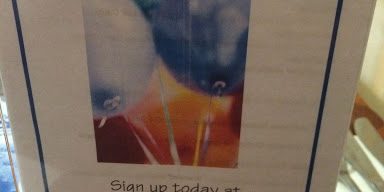 I’ve already established that Meltons is one of the nicest places to eat in York (and I’ll hopefully be reconfirming this at their next ‘First Saturday’ lunch) so it’s a little surprising it’s taken this long to get round to covering its sibling on Walmgate, Meltons Too. The perfect excuse dropped through the letter box the other day in the form of a Birthday Club invite.

Meltons Too Birthday Club is surely one of York’s finest bargains. In return for your name, address and birthdate you are rewarded with a free meal every year. Can’t really say fairer than that can you? In previous years there was no restriction on choice but I note there’s now a limit on the dishes covered, restricting you to their set price menu. On a personal level, this seems utterly sensible. Last year, our visit coincided with the Lobster festival and I felt slightly guilty ordering from the specials board, almost as if taking advantage of our hosts’ hospitality! Suffice to say the selection offered now is still ample and probably still far more than I would offer in a similar position.

Having been to Meltons Too on lots of occasions over the last 12 years, I didn’t bother booking a table. Finding somewhere to seat and feed you irrespective of time or day has always seemed to me a speciality of the establishment and so it proved we were quickly seated by the friendly waiting staff and ready to go. We kicked things off with a half bottle of cava (undistinguished but perfectly acceptable and only £8) while we offered toasts and got stuck into the serious business of choosing our courses.

Starting with the potted fish and paprika, topped with smoked salmon and the breseola with horseradish cream and watercress we agreed quickly that the beef was the better option here. Rare and juicy but not overpowered by the horseradish or mountain of watercress, a neatly judged dish that avoided the occasional chewy tendencies of cured meat. The fish was perfectly decent, if ever so slightly bland, none of the promised paprika was evident but the quantity was generous and toasts and chutney with it did the job.

We washed this down with a carafe of Colombard Sauvignon Blanc of perfectly acceptable quality, stereotypical notes of apple the order of the day after we set aside the cava (glasses and bottle of which remained stubbornly on the table for the duration of the meal).

Heading onwards to main courses we plumped for a trio of pork and imam bayaldi. The pork came with a generous chunk of black pudding, a hunk of shoulder and a bed of the ubiquitous and increasingly shark-jumping pulled pork. Chunks of chorizo were also resident on the plate under a lemon and fennel sauce. As I write this now and look back at the menu I struggle to recall lemon or fennel but the jus it was served with certainly hit the spot. I also note in retrospect that a pulled pork and chorizo burger was promised. I suppose that was served in its constituent components as that bed of succulent, smokey and very good pulled pork. The shoulder needed cooking more slowly and the skin needed crisping while the large puck of black pudding was excellent, giving a robust base for that mouthwatering jus. Further review of the menu leaves me also wondering where the seasonal greens were, apparently having been substituted for a single large roast potato. Another perfectly decent dish.

The imam bayaldi was a baked aubergine dish, slices of which were presented with a tomato sauce and feta cheese topping alongside couscous and a mountain of leaves. The soft tomato gave a good base for the couscous but the slices of aubergine were a little dry and feta could have been more generous. A, um, perfectly decent dish?

Finishing with sticky toffee pudding that was pleasingly swimming in toffee sauce, we settled the tiny bill (£33) and headed off to check out the evening’s Bar Billiards happenings.

The one thing I’d definitely suggest dropping were the complimentary crisps. Salty, strangely textured and no longer distinguishable by flavour as sweet potato or parsnip, these were not pleasant.

Over the last 10+ years I’ve had some excellent meals at Meltons Too. Generous breakfasts, hearty Sunday roasts, impromptu good value meals, a memorable beer tasting at last year’s Food Festival and sundry birthdays. You may have picked up on a theme here, everything was perfectly decent. The meal had some highlights and nothing could really be described as bad, it just wasn’t what I hoped for and didn’t do the place justice. A few years ago I seem to recall feeling that Meltons Too went through what felt like a phase of inconsistency that I hoped was over. On this evidence I’m afraid it’s still there, though it’s by no means catastrophic. Fortunately, my partner’s birthday and mine are in consecutive months, so we’ll be checking it out again shortly.

Welcoming back The Star Inn the City
12th August 2020